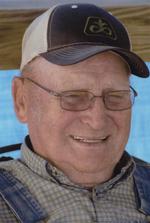 Dick was born on August 17, 1926 in Burlington Junction, Missouri to David B. and Grace L. (Brown) Greeley. He attended the Hagey country school and Quitman schools.

After the war Dick worked for Arressor Popcorn Plant west of Burlington Junction. He was a lifelong area farmer and was proud that his farm was slated to be named a Missouri Century Farm this year. He helped start the Elmo Rescue Unit. He was a Methodist and a longtime member of the Lions Club and earned his 60 year award in American Legion Post 315 in Burlington Junction. He received his high school diploma in 2002. Dick was a social person who enjoyed life and visiting with his many friends and acquaintances.

He married Bertha Linebaugh in 1952 in Tarkio, Missouri. They raised four sons and farmed until Dick retired in 1995 when they moved to Maryville. They made many trips, visiting Spain, California and other points of interest. She preceded him in death in 2001. Later he met Carole Reese and they enjoyed traveling, dancing, and camping for more than 17 years.

Services 2pm Wednesday, August 26th at the Price Funeral Home. Burial at Nodaway Memorial Gardens in Maryville. The family will receive friends one hour prior to the service. Memorials can be made to a charity of your choice. www.pricefuneralhomemaryville.com.