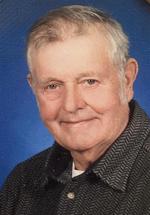 Marvin Wiederholt, 83, of Ravenwood, Missouri passed away on Saturday, October 17, 2020 at the Orilla’s Way in Grant City, Missouri.

Marvin was born on March 3, 1937 in Conception Junction, Missouri to Edward P. and Rose C. (Miller) Wiederholt. He served in the United States Air Force and was a member of St. Joseph’s Parish in Parnell and Tri-C American Legion Post #464 in Conception Junction. He was a farmer and had worked for Energizer for 22 years.