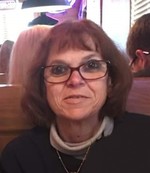 Leann Johnson, age 56, of Wyalusing, PA passed away surrounded by her loving family Wednesday, January 15, 2020, at the at her home.

She was raised in Maryville and was a graduate of Maryville High School. Leann was employed with Northwest Missouri State University, as well as with Wal-Mart, JC Penny, Casey, Pilot, and Break Time Gas Companies in Missouri and Connie’s Market after she moved to Wyalusing.

She enjoyed shopping, watching fireworks, and doing various crafts. She took great pleasure in watching squirrels, butterflies and birds, especially cardinals. Leann looked forward to visiting her family and friends in Missouri after she moved to PA. She loved to spend time with her family including her dogs Macey and Copper.

Funeral Services will be held 2pm Thursday, January 23rd at the Price Funeral Home in Maryville. The family will receive friends from 12noon until 2pm on Thursday. Leann will be cremated following the services.

A Funeral service was held on Saturday, January 18, 2020 at 11:00 AM from the Sheldon Funeral Home, 155 Church St., Wyalusing, PA with Rev. Dr. Barry Ballard of the Wyalusing Presbyterian Church officiating.