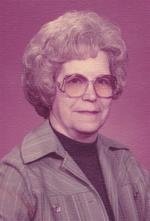 Pauline was born on March 31, 1924 in Westboro, Missouri to Charles and Dora (Stinnett) Horner.

On December 25, 1946, she married Paul David Miller in Troy, Kansas. They lived in Sheridan, Missouri rural Skidmore and in the town of Skidmore during their 56 years of marriage.

Pauline was a homemaker until she joined the work force in 1967. From 1967 to 1987 Pauline worked at all the nursing homes in the Maryville area during her working career. In 1972 she obtained her Accredited Nurse Aid Certificate.

Pauline loved to feed and play cards with her family. Pauline’s homemade beef and noodles was a favorite amongst family members.

Pauline was preceded in death by her parents, her husband, nine siblings, two granddaughters, one grandson and one great-grandson.

Services 10am Wednesday, August 26th at Price Funeral Home in Maryville. Burial Hillcrest Cemetery in Skidmore, Missouri. There will be no visitation held. www.pricefuenralhomemaryville.com.