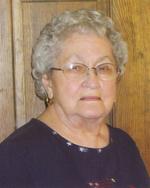 Doris L. Messick, 89, of Maryville, Missouri formerly of Graham, Missouri passed away on Wednesday, February 13, 2019 at Parkdale Manor in Maryville.

Doris was born on March 4, 1929 in Skidmore, Missouri to Edwin and Mildred (Barrett) Gillihan. She was a 1947 graduate of the Skidmore High School and a member of the Graham United Methodist Church.

She married Ralph Messick on March 15, 1947. She and her husband had worked for Douglas Aircraft Company in California. Later moving to Texas, where Ralph worked in the plumbing business. They eventually returned back to the Graham area where Ralph worked as a plumber and was well known in the area. Doris worked in the Graham Post Office as a clerk and was sworn in as Postmaster on October 25, 1975, until her retirement in 1994.

Services 10am Monday, February 18th at the Price Funeral Home, Maryville, Missouri. Burial Prairie Home Cemetery, Graham, Missouri. The family will receive friends beginning at 9:30am Monday until 10am. Memorials can be made to the Graham United Methodist Church or Tri-City Nutrition Site, Maitland, Missouri. Online condolences can be made to the family at www.pricefuneralhomemaryville.com