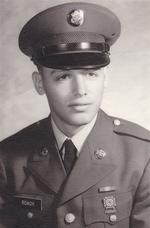 He is survived by his wife Karyn of 52 years. They married on November 2, 1967 in Maryville; two daughters, Shelley Roach of Olathe, Kansas and Amy Skinner of Spring Hill, Kansas; one brother, James of Maryville and three sisters, Julia of Colorado, and Deb and Cordelia of Iowa; three grandchildren and one great-grandson as well as many nieces and nephews.

He was preceded in death one sister, Marilyn, two brothers, Richard and John and his parents Porter and Frances Roach.

He served in the United States Army from 1967 to 1969. He drove the gas truck for Dempsey-Harden for 30 years, before retiring he worked briefly for Walmart and Kawasaki.

Mr. Roach has been cremated under the care of Price Funeral Home. There will be no visitation held. A private family memorial service will be held at a later date. www.pricefuneralhomemaryville.com.