To share your memory on the wall of Beverly Jackson, sign in using one of the following options:

The gesture that can change the world

Beverly was born on February 3, 1932 in Barnard, Missouri to Opha M. and Hazel V. (Thompson) Crawford. She attended grade School at Trego and graduated from Graham High School. She was a homemaker and attended Skidmore Christian Church.

She married Doyle E. Jackson on May 11, 1952. He preceded her in death on February 27, 2001. She was also preceded by her parents, one son, Rodney Jackson and five brothers, Dale, Forrest, Curtis, Martin and Eldon.

To send flowers to the family or plant a tree in memory of Beverly Sue Jackson (Crawford), please visit our Heartfelt Sympathies Store.

Provide comfort for the family by sending flowers

We encourage you to share your most beloved memories of Beverly here, so that the family and other loved ones can always see it. You can upload cherished photographs, or share your favorite stories, and can even comment on those shared by others.

bennett parks crawford and Love, Kurt and Janice have sent flowers to the family of Beverly Sue Jackson (Crawford).
Show you care by sending flowers

Guaranteed hand delivery by a local florist
BC

Posted Jan 23, 2020 at 04:12pm
Our Deepest Sympathy! You are all in our thoughts and prayers! Love Kurt and Janice

Love, Kurt and Janice purchased flowers and planted a memorial tree for the family of Beverly Jackson. Send Flowers

Posted Jan 22, 2020 at 04:54pm
Doodle & Bev were so nice to me when I started going to the Eagles- loved playing cards with them. Even made a couple trips to their house at Pumpkin Center to hang out. Lots of fun!
Comment Share
Share via:
HS

Posted Jan 22, 2020 at 02:37pm
To Keith Jackson and the entire family. Our thoughts and prayers are with you. With deepest sympathy. From Keith's Chicago Family.

Flowers were purchased for the family of Beverly Jackson. Send Flowers

Posted Jan 22, 2020 at 10:25am
Our love and deepest sympathy to the entire family. Love, Jackie Crawford. Stacey and Judy Crawford and family. Debbie and David DArcy and family.

Blooming Garden Basket was purchased for the family of Beverly Jackson. Send Flowers 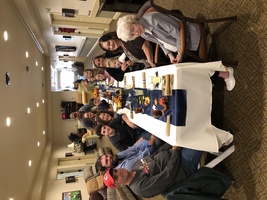